One of the most impressive things to do is to sink the eight ball on the break.

This not only wins the game but it looks really cool!

POOL LESSON: How to make the eight ball on the break

Make sure the rack is tight. A tight rack will insure a more consistent outcome.

Set up the cue ball one ball away from the rail (see diagram for exact placement). If you are on the right rail use low left English, if you are on the left use low right English.  Aim as if you are trying to split first and second ball. You actually do not want to hit the first ball as it will push the eight ball in the wrong direction.  The idea is to make the eight ball in the side pocket opposite from the rail that you are shooting from.

It will take some practice in getting the right stroke. Anytime you hit the cue ball low and hard you risk sending the ball flying off the table. Especially in a bar where the cue ball is so much larger than the other balls. Try to learn how hard you can hit the ball without sending it flying.

Low left or right English is used to avoid scratching in the corner pockets. Hitting the cue ball with english and enough force to break the balls up will make the cue ball go off it’s aiming line. This is called squirt. If you are hitting the cue ball on the right side it will have the tendency to “squirt” to the left. So adjust your aiming line accordingly.

Sinking the eight ball on the break

HOW TO USE A POOL BRIDGE 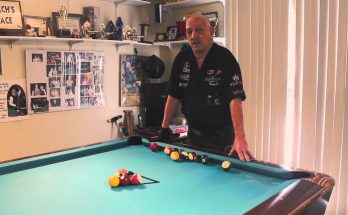