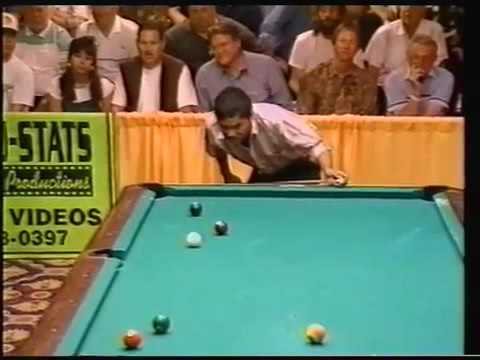 Efren Reyes is well known for his pool playing prowess. The two-time world champion, referred to by some as “The Magician,” of Filipino descent. Born in Pampanga, he and his family moved to Manila in 1959, when Reyes was five years old. It was in Manila that he first began to develop his love for and knowledge of the sport he would later go on to dominate on the local and international level.

Efren started out as a billiards attendant at the pool hall that his uncle owned. Though he couldn’t initially reach the tables without assistance and wasn’t yet able to play, he still spent plenty of time on them. They doubled as his bed at night.

In the decades of the 1960s and 1970s Reyes played three cushion billiards. It was during this time that he was discovered and asked to participate in some of the bigger billiard tournaments. He experienced almost immediate success. He won tournaments in the United States, various parts of Asia and Europe. Reyes quickly developed a reputation as someone to be reckoned with on the felts. In the 1990s, he was considered as good a billiards player as his fellow countrymen, Francisco Bustamante and Jose Parica.

Many people consider Efren Reyes to be the best billiards player in the world. One person of note who has expressed such an opinion is Billy Incardona, a fellow professional pool player. He has stated on record that Reyes is perhaps the greatest player of his lifetime.

Efren has received numerous awards over the years for his great play. In 1995, Billiards Digest Magazine named him the Player of the Year. In one of the magazine’s 1996 editions, a consortium of professional players and industry insiders voted him as the best one-pocket player of all time.

Reyes became the first non-American to win the US Open Nine Ball Championship in 1994. He successfully took on Nick Varner to simultaneously secure the title and make history. The duo met again in 1996, this time in the Color of Money event held in Hong Kong. Reyes won again, this time taking home a whopping $100,000 the biggest purse (single winning) in billiards history. Efren would go on to win many more events and titles.

Reyes is still going strong and continues to play pool competitively. In 2010, he won the top prize in the12th annual Derby City Classic.